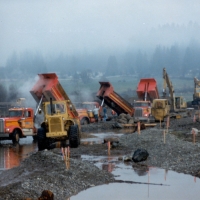 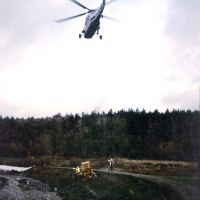 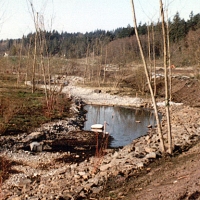 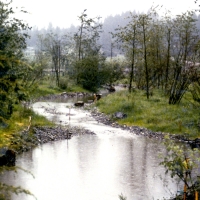 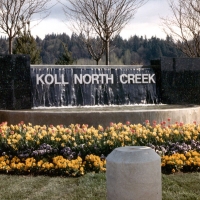 North Creek had long ago been channeled for moving logs. When developers were ready to build they wanted to restore the stream and surrounding habitat. At the time it was the largest stream re-location that had been done in the United States. Experience was gained here that allowed for future restoration of many streams in the Northwest. Since the restoration, Coho Salmon have been successfully raised in North Creek within the Koll Business Park.

The newly constructed stream was built over a peat bog 200 feet deep. The finished stream was 3,600 feet long, averaged 25 feet wide and restored 18 pools for fish habitat. Logs and rockeries were built into the stream bed to create the pool areas.

Immediate shade was required to cover 70% of the stream to provide for the needs of the fish. To protect the peat bog it was necessary to relocate the trees by helicopter rather than trucks. 323 existing Willows and Cottonwoods were dug and installed at specified locations along the stream.  Six months after installation, the stream channel looked as though it had always been there.